Content Distribution: Get More Eyes on Your Awesome Blog Posts!

You’ve likely seen them while browsing various news articles online. Heck, you’ve probably even clicked on one of them! But here’s the catch: you mightn’t even know it.

Ever noticed the article previews placed immediately after a story you’ve just read?

They’re normally labelled as “related stories”, “stories you may like”, “around the web”, or something similar. They blend in to look like the website you’re currently on but can direct you to another site.

Yes, chances are you’ve seen them before. “Those random links at the bottom of news stories, blog posts, and articles?” Yep! That’s what we’re talking about! But, they’re not totally random. (More on that later, though.)

They’re not ads, either.

Content in the form of articles, blog posts, videos, slideshows, infographics, and more. But nope, they’re not ads.

The popularity of blogging has contributed to the astronomical volume of content being produced day-in and day-out, just waiting to be discovered and consumed by customers, prospects, clients, visitors, sceptics, fans, partners, and general internet users.

But how is this high volume of content being found?

With constant algorithm changes to many of our favourite social networks, blasting a new blog post over Facebook and Twitter is often not enough to get a decent number of eyeballs on your page.

Before you jump the gun and assume content is randomly churned up and spat out wherever possible, understand that each piece of content is displayed to audiences that are targeted and engaged, with the aim of generating as high a click-through rate as possible.

You’ve probably heard it a thousand times: content is the anchor of any digital strategy. It’s King, because Google loves it. But the workers pushing that content out to readers is some of the behind-the-scenes power.

It’s one thing to create engaging, valuable, interesting, thoughtful content (see where I’m going here? Content needs to be GREAT!), but it’s a whole other thing to get that content seen by a substantial number of users.

Not everyone who reads your blog post or visits your site is ready to purchase, but they still might be after a handy guide to using Pinterest, a great way to store Christmas decorations after the New Year, or simple exercises they can do during their work day.

Here are a couple of the most well-known content distribution networks. Granted, you mightn’t have heard of them, but it’s almost a certainty you’ve seen them in action.

Next time you finish an article, check the related stories, and check who’s recommending them!

Launched in Tel Aviv and now headquartered in New York, Taboola earlier this year partnered with Yahoo! Japan. Not bad for a seven-year-old company!

Taboola reaches more than 86 per cent of US desktop internet users, second only to the mecca of the internet, the Google Ad Network (reaching 95 per cent of the same group).

Taboola serves 150 billion recommendations to 400 million unique users every month. In fact, it reaches more US desktop users than Facebook!

Could your latest blog post be one of those recommendations, too?

Outbrain’s mantra is “Discover what’s next”. Their simple aim is to bring great content to their audience by creating a personalised experience. It was founded in 2006 by two entrepreneurs, one who sold his company Quigo to AOL in 2007 for $363 million, and the other who had previously worked at Shopping.com, a company acquired by eBay in 2005. Talk about experience!

Launched in February 2014, this new baby pledges its focus on advertising synching seamlessly and naturally with mobile search.

Limk reaches 4 million users per month. It’s come a long way from 2005 when it launched as a social bookmarking app! Its actions revolve on the philosophy to provide “smarter content recommendations”.

You’ve probably seen these crop up more often in your News Feed over the past six or so months. Never one to lag behind, Facebook developed its own “related stories” distribution method.

Here, though, the populated list of relevant articles does not appear until you have clicked a link. By clicking the link, you show Facebook that you have enough interest in a topic (let’s call it topic X) that you may want to:

A) continue reading about topic X from other sources

The example below shows how my News Feed looked after I had clicked on that first article. Now, because I clicked, Facebook offered me two similar stories: one from a different source (Herald Sun) and the other from the same source (The Urban List). 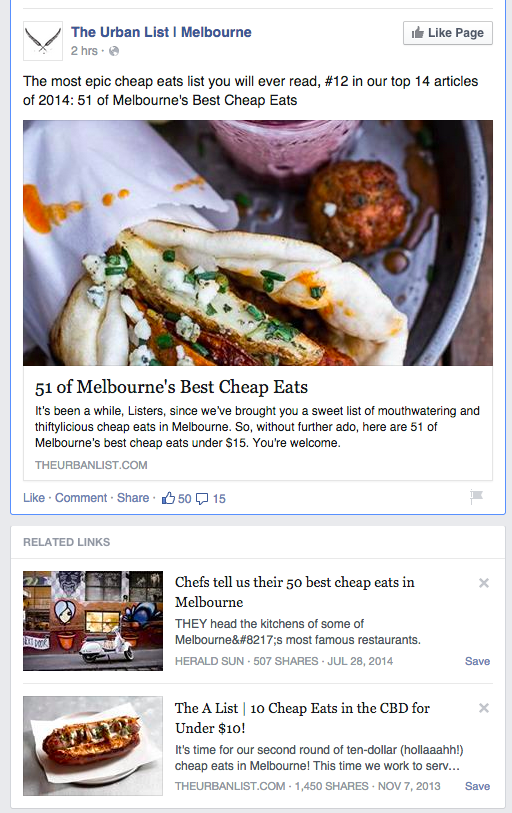 Facebook populates related stories itself. (But the question is how long will it be before this space is sold to Facebook advertisers?)

This is their response when asked how they determine which articles are shown:

“We have a set of different algorithms to generate related articles. These filter and rank based on the percent of related words, number of likes, click through rate, and domain related signals. It’s a newer product, so it’s still improving!”

Did you pick up the general aim across all five of theses content delivery networks?

What you research and read about on the internet provides a scope for these content delivery networks, allowing them to curate content that stands the best chance of piquing our individual interests.

Where will my stories be shown?

Undoubtedly two of the most popular content distribution networks, Taboola and Outbrain, are partnered with some of the biggest online publishers in the world, including The Weather Channel, Business Insider, USA Today and Mashable (Taboola), and Forbes, Time and BBC.co.uk (Outbrain).

These content distribution networks have intricate algorithms that look at behaviour, contextual similarities and audience patterns to help choose what will be recommended, and where it will be displayed.

Target the “right” users with a content distribution strategy

Often, marketers struggle to create content on a regular basis, and work very hard to avoid dropping out of a great routine which sees us curating, creating and promoting great content.

Sometimes, though, the tables turn and we’re sitting here with so much content that needs to be promoted in more ways than a blog post promotion on Facebook, a couple of Tweets, and a paid advertisement on LinkedIn.

The content distribution tools mentioned above explicitly focus on matching content with users’ interests (so sometimes the recommendations won’t necessarily be related to the specific article).

As a general example, say you’ve read an article about the best exercises for new mothers. It wouldn’t be surprising to see recommended articles on topics about newborns (like sleeping or feeding advice), mothers, healthy eating, fitness, or a review of a useful product or piece of equipment.

Some of the content distribution tools also allow you to target geographically, so you can hone in on particular regions. 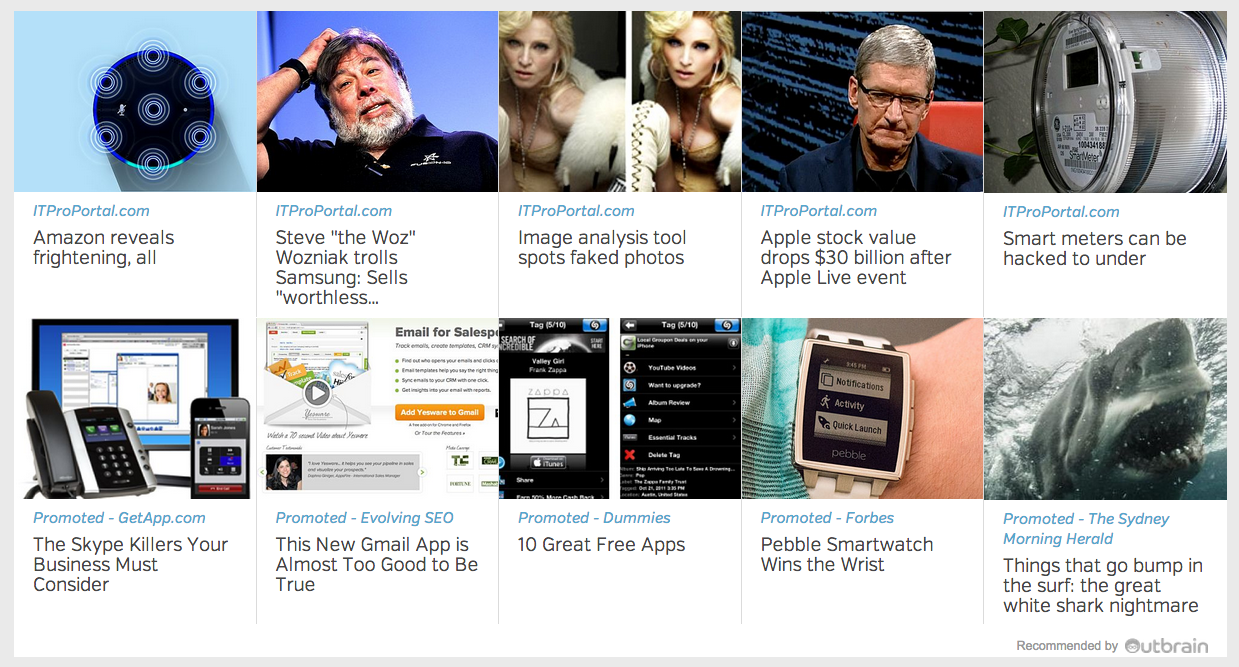 This is how the Outbrain recommendations are displayed. Note the blue links – the top row are all from the same website – the website I was already on – but the bottom row are from a variety. In the bottom right corner, you can see the text “Recommended by Outbrain”. Notice how seamlessly they fit in?

Even if you recognise that clicking these links might move to away from the site that you’re already on, it’s often you won’t mind it.

Precise targeting and high-quality relevance means you’ll appreciate a little nudge to continue discovering more things that are of interest to you, especially, as Outbrain so excellently explains, if you’re “already in content consumption mode” , you’re willing to get prompted to your next article, no matter what website it’s on.

Content distribution is an unobtrusive way to gently encourage users to continue consuming different forms of content. The way links are displayed doesn’t make them feel “promotional” or “showy” in any sense; they blend well with the existing website and don’t use force tactics (like popups) to direct readers.

So the next time you find yourself uncontrollably clicking to an article immediately after you’ve finished a first, remember the personalised experience is catching you when you’re already engaged, and offering you material you’re probably already interested in – it’s a win-win!